Kinetic Comedy returns for a brand new season of shows at the Saw Swee Hock Centre in Holborn.

Live from a new larger central London venue, Kinetic Comedy is a smash hit show that continues its tradition of showcasing a diverse line-up of established and up and coming talented acts from different races, cultures and genders. In its 6 year history, Kinetic Comedy has a great reputation amongst fans and in the industry for bringing audiences a one-of-a-kind comedy experience in a relaxed, inclusive environment, alongside a live DJ and Twitter wall backdrop for full on audience interaction.

Venue name: Saw Swee Hock Centre
Venue address:1 Sheffield Street, London, WC2A 2AP
Genre: Comedy
Tags: Standup, Comedy, Improv, Multicultural, Entertainment
How Much: £15 in advance, more on the door
Artists: Inel Tomlinson, Dane Baptiste, Sophie Willian, Michael Odewale, Nigel Ng
Ticket link: https://www.kineticcomedy.com/shop/
Description:
We’re back and even bigger & better than ever before!
Kinetic Comedy – the popular energetic live stand up event which showcases the best stars of the UK comedy crop – is back in our brand new home on Saturday 4th February 2017!
The relaunch event will be held at the Saw Swee Hock Centre, 1 Sheffield Street, London, WC2A 2AP.
In its new larger Central London venue, Kinetic Comedy will continue its tradition of showcasing a diverse line-up of established and up and coming talented acts from different races, cultures and genders to bring audiences a one-of-a-kind comedy experience in a relaxed and inclusive environment.
The relaunch features comedy from:
Dane Baptiste
Sophie WIllian
Michael Odewale
Nigel Ng
TV / Radio Personality and multi award nominated comedian Inel Tomlinson – founder, exuberant lifeblood of Kinetic Comedy and half of one of the UK’s very first black comedy double acts Johnny & Inel – will host each show guiding the audience through an evening of comedy, games and unique interactive competitions.
We even have our brand new Kinetic Afterparty hosted by DJ Dymond with a selection of various DJ’s playing the best beats to get you shaking your rumps till late.
In its six year history, Kinetic Comedy has become well known amongst fans, critics and industry alike as one of the only places to showcase truly multicultural talent.
“The most fun you can have at a comedy gig” – BBC Comedy
“The liveliest comedy night in all of London“ – London is Funny
“Pumped with energy and a whole lot of laughter” – Comedy Blogedy
“One of the funniest and diverse comedy nights in London” – What’s Up TV
“A very friendly, relaxed comedy club” – Time Out

INEL TOMLINSONhttps://www.inel.tv
Inel Tomlinson exudes the type of magnetic charm, charisma and talent that instantly demands your attention whether on TV, stage or radio. Coupled with an electric smile and the world’s loudest laugh, it’s hard not to fall for his exuberant personality, which radiates throughout his extensive body of work.
Previous Post
Kinetic Comedy – The Big Relaunch
Next Post
How to find us 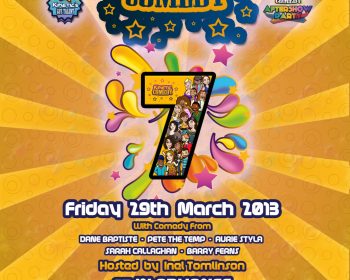 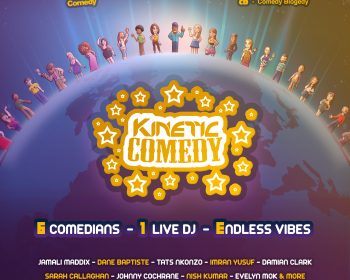